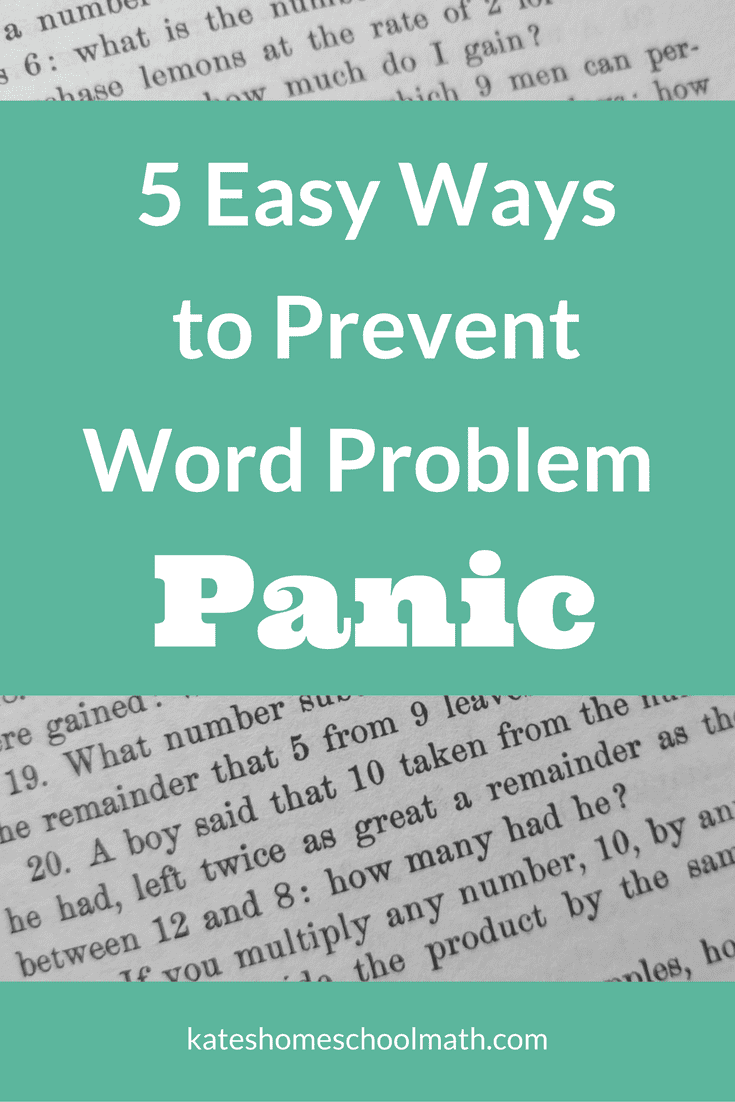 How to teach word problems, with 5 easy ways to help your children understand and solve word problems–and prevent that deer-in-the-headlights look!

Your child is humming along on her math assignment, pencil flying over the page.

All is well. But then her pencil comes to a screeching halt. She’s gotten to the word problems.

In my experience, kids hardly ever freeze up on word problems because they can’t perform the calculations.

And it’s not because they can’t use math in real life. After all, if you give 3 children 7 doughnuts to share, I promise you that every child will end up with 2 and 1/3 doughnuts–even if none of them has ever solved a single fraction division problem!

Kids freeze up with word problems because they can’t decide which operation to use. “Do I add? Subtract? Multiply? Divide? Add then multiply? Subtract then divide? AAAHHH!”

Word problems feel very artificial to kids. They’re about people they don’t know, contexts they don’t care about, and situations they don’t understand. So, instead of using their common sense, kids just flail around, hoping that whatever operation they pick will be the right one.

The secret to helping kids solve word problems with confidence?

Once kids see that word problems are just real-life problems written on a page, they’re able to use their everyday reasoning skills to make sense of word problems and solve them successfully. These five simple teaching strategies will make word problems come alive for your children so that they can tackle them with confidence.

1. Make your child the star

This is the easiest (and most fun) way to make word problems more relevant to kids: just change the names to people your child knows.

At my house, a lot of my daughter’s Singapore Math problems involve names she’s never heard of and that we’re not quite sure how to pronounce. Weilin? Meihua? I love the cross-cultural learning, but they make it hard for my daughter to focus on the math.

So, we just change the names to those of her and her brother. 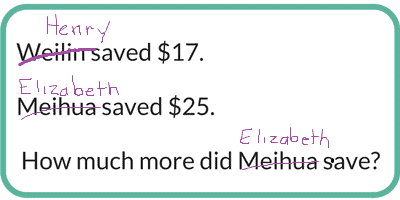 With this one simple change, she can easily visualize the problem. Plus, she then enjoys figuring out that she saved $8 more than her brother.

Early elementary students (kindergartners, 1st graders, and 2nd graders) are very concrete thinkers. If your kids are this age, you have the opportunity to train them to think about word problems as real-life problems from the beginning.

If it’s about books, grab a stack of books.

If it’s about doughnuts, head to Krispy Crème (or get some pretend food from the toy kitchen).

And if it’s about live lobsters—well, feel free to use blocks or counters to stand for the lobsters instead.

Using hands-on manipulatives and real objects will help your primary-age children learn not to be intimidated by word problems. This will pay off as they begin to solve more complicated word problems in the upper elementary grades.

As children progress through the elementary grades, it’s tedious and time-consuming to use counters to model problems with larger numbers. No one wants to count out 247 counters and then subtract 194 of them!

Instead, pantomime word problems to help them snap into focus. For example: 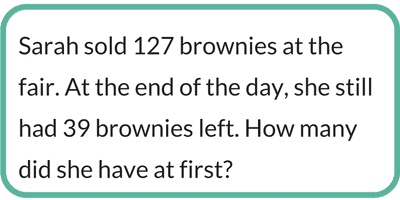 This is a hard problem! It only requires adding the two numbers together, but the structure of the problem makes it a challenge for kids to recognize it as addition. But when you act it out, the problem becomes much easier to understand.

Then, pretend to look at the brownies still left on the table.

This simple drama will help your child visualize what is happening in the problem. Once he understands the sequence of events, it’s easier for him to understand that the question is asking about the number of brownies before any were sold. All he has to do is add 127 + 39 to find that Sarah had 166 at the beginning of the day.

Sometimes, kids freeze up because the numbers in the problem simply look too BIG. They’re already worrying about the calculations that they’ll have to do, and so they don’t have any brain space left over to figure out what the problem is actually about.

To solve this, make the numbers in the problem easier. A lot easier. Lightly cross out the large numbers and substitute easy numbers like 1, 2, or 3 for them. Then, have your child think through the revised problem. 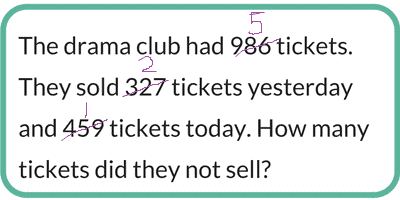 This problem is a lot less overwhelming now. Plus, you can now directly model it with counters if your child’s still not sure what to do.

Once your child has figured out how to solve the revised problem with the smaller numbers, help her translate her work to the larger numbers: “For your first step, you added the tickets sold yesterday to the tickets sold today. Now try it with the original numbers in the problem.”

For example, say your child is stuck on a problem like this:

Just change the fractions or decimals in the problem to whole numbers.

Now it’s easy to see that she should use division to solve the problem. Once she’s solved the simplified problem, she can go back to the original problem and use division to find the answer.

All of these teaching strategies have the same goal: making word problems come alive and feel relevant to your children. Use them to help your child use her common sense and reasoning skills to solve word problems with confidence–even when the doughnuts aren’t right in front of her!