Addition facts practice doesn’t have to mean just flash cards and worksheets. Your kids will love playing these free printable addition games. All of them are classic children’s games –but with an addition fact twist. 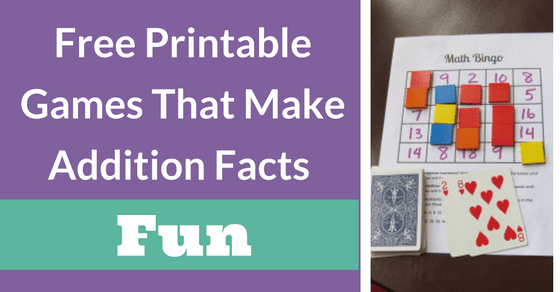 Be the first player to cover 5 squares in a row, either across, down, or diagonal

The dealer shuffles the cards and turns over the top two. Have your child say the sum of the two cards. For example, if the cards are a 2 and 9, your child would say “11.”
Each player covers a square containing the sum. Continue until one of you wins by filling in an entire column, row, or diagonal.

Be the first person to cover all the numbers on your game board.

On your turn, roll two dice. Cover the number that matches the sum of the two dice. If the sum is already covered, play passes to the next player. The first person to cover all of the numbers on their game board wins.

Have everyone play simultaneously with their own dice, as fast as they can.

Win the most cards.

As in the regular card game War, shuffle the cards and deal out an equal number of cards to each player. Players place their cards face down in a pile.
To play, turn over the top two cards in your pile and announce their sum. For example, if you turn over a 3 and a 5, you would say, “Five plus three equals eight.” Then the other player turns over two cards and announces their sum.
Whoever’s sum is greater wins all 4 cards. If the sums are equal, play again. The player whose sum is greater wins all 8 cards. Set aside the cards that are won.
Play until both players use up all the cards they were dealt. Whoever wins the most cards wins the game.

I hope you and your kids enjoy these free printable addition games! For more fun games that will help your children master the addition facts, check out my book, Addition Facts That Stick. 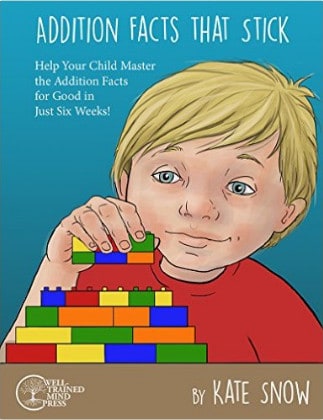