“Onetwofreefourfive!” Preschoolers and kindergartners often have trouble matching spoken numbers and objects one-to-one. Learn two quick fixes that will help your child learn to slow down and count correctly.

A friend who’s a kindergarten teacher recently asked me for advice about her students who are still having trouble counting. “They know how to say the numbers in order,” she said, “but they rush and don’t count every object one-by-one.” She demonstrated for me, running her finger along a line of imaginary counters and saying “Onetwothreefourfivesixseven.”

Sound familiar? If your child does this, you’re not alone (and you haven’t messed up!) It’s a common mistake for preschoolers and  kindergartners as they begin to make sense of what numbers mean. Even though counting seems basic to us adults, it’s actually a very complex skill with many subskills to master. To be able to count accurately, a child has to learn:

My friend’s students know the order of the counting words, but they’re having trouble with the “once and only once” part. Instead of matching each word one-by-one to an object, they’re simply saying the words in order and stopping once they get to the end of the row of objects.

How to help your preschooler or kindergartner count correctly

Fortunately, there’s an easy way to help children slow down and match numbers and objects one-to-one. Instead of having your child count by pointing, have her count by moving the objects.

Step 1: Counting with an egg carton.

First, give her an empty egg carton or ice cube tray. Show her how to move each object into one of the cups as she counts it, and then ask her to try it herself. Matching each object to a cup in the egg carton reinforces the idea of one-to-one matching in a visual and kinesthetic way. Her whole body is involved in focused on one object at a time, which will help her match each spoken word to just one object.

Once your child can count objects with an egg carton, increase the difficulty slightly. Give her a small pile of counters in a bowl or on a paper mat. Ask her to count the objects one-by-one by moving them to a different bowl or mat. Moving the objects (rather than pointing) will cause her to slow down and focus on one object at a time. It will also make it easier to keep track of which objects have been counted and which have not.

Once your child has practiced matching one-to-one with egg cartons and bowls, she’ll be ready for more sophisticated counting activities.

For more simple games that will help build your young child’s number sense, check out my book, Preschool Math at Home. It’s full of quick, playful activities that will help your preschooler build a great foundation with numbers in just five minutes a day. 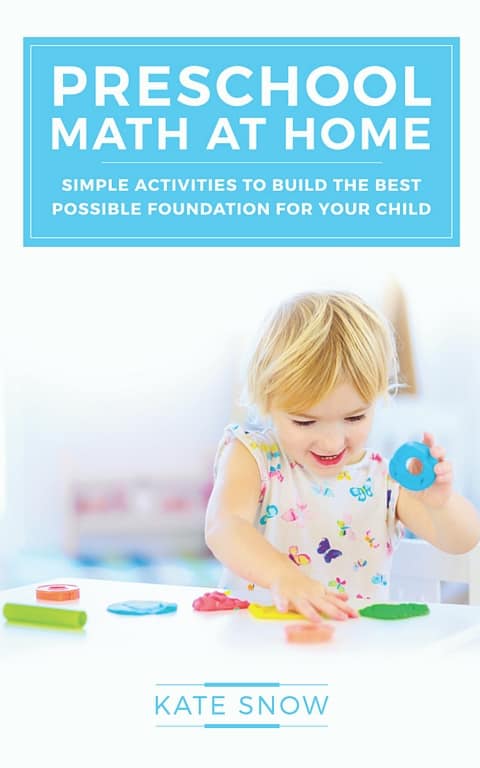 Give your preschooler a great foundation in math–
in just 5 minutes a day!