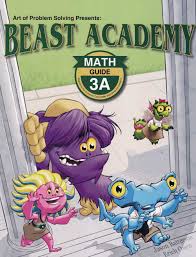 Later this week, I’ll be reviewing Beast Academy, an offbeat math curriculum for grades 3-5. (You’ll notice the cover features cartoon monsters!) My son uses Beast Academy and loves it, but it has no teacher’s guide or suggested schedules. I tend to be a super-scheduled box-checker, but it has been so freeing to use a curriculum without any suggested pacing or lesson structure. I try to follow my son’s lead and work with him for as long as he has stamina and interest. We usually spend fifteen to twenty minutes working together each day. Sometimes, he completes two workbook pages in that time, but often less if the problems are difficult.

One day last week, my son completed just one problem during his entire math session. He wasn’t dawdling or goofing off—in fact, he was extremely engaged and working hard the entire time. If your math education was like mine, it probably sounds like heresy to spend a whole math lesson on just one problem. But sometimes, it’s much more beneficial to dig deep into just a few interesting problems (or even one problem) rather than fly through a bunch of easy problems. In this article, I’ll describe the benefits of unhurried homeschool math problem-solving and explain how you can reap these benefits for your children.

Traditional math lesson formats in the U.S. versus Japan

From elementary school to high school, my math classes always followed the same format: First, the teacher would demonstrate how to solve a particular kind of problem. Then, the class would practice this technique by solving many similar problems. There might be a bit of review, and a couple of word problems at the end, but most of the problems simply required mimicking exactly what the teacher had done, over and over.

This lesson style has its uses, but it’s not the only way for kids to learn math. In Japan, it’s common for a class to spend the entire class focused on just one problem. As you can imagine, the problems need to be carefully written to be worth that much time! Teachers work in teams to choose the problems so that they challenge their students without frustrating them, and so that the problems help their students learn worthwhile mathematics.

A problem worth spending a whole math lesson on

My son is currently working through a Beast Academy unit on measurement and time. The problem that took so long for him this week was this: Compute your age in days.

The great thing about this problem is that there’s not just one way to figure it out. It requires pulling together a lot of information (the number of days in the different months and which years have leap years) and then using several different basic operations to find the final answer.

His workbook page included a chart of the number of days in each month and a reminder to think about leap years. It also included a worked-out example, but I decided not to read through that at first so that my son could figure out his own solution to the problem.

My son is pretty close to his eighth birthday, so he decided to start by figuring out how many days were in eight years, adding in the days for leap years, and then subtracting off the days until his birthday. He did this pretty quickly, so I could have had him move on to the next page in the workbook. Instead, I decided to show him the suggested solution in the workbook and challenge him to solve the problem using the book’s way.

The workbook suggested making a chart of the years he had been alive and the number of days lived each year. He was able to quickly fill in most of the years, but he slowed down when he got to his birth year, since he was alive for only part of that year.  After consulting the chart of months and some careful adding, he had his final answer. He was excited to see that it matched the first answer he’d found, so he could be confident that it was correct.

It’s always a temptation to me to get the math lesson done and push forward, but spending so much time on one problem was well worth it. Some of the benefits of spending more time on fewer problems:

How to encourage relaxed problem-solving in your homeschool

If you’d like to see these benefits in your homeschool, you don’t have to buy a special curriculum or change everything you’re doing. All you have to do is do less. Start with a topic that your child knows fairly well. Instead of assigning several pages of problems to your child, pick one or two of the hardest problems. Sit with your child as he works and let him know that he can spend as much time as needed solving the problems. Make it an enjoyable, social time and discuss the problem together as he works. If he finds an answer, challenge him to find another way to solve it. If he gets stuck, give him a hint and encourage him to keep trying. Above all, keep the focus on the quality of your child’s thinking and not on the number of problems solved.

I do not have my children solve just one math problem every day. Children need to learn to compute accurately and automatically, and solving lots of simple problems is essential for building those basic skills. (In fact, the day after my son solved this interesting word problem, I drilled him in the multiplication facts, and he completed a page of measurement conversions.)

But, if math time has started to feel like a rote chore rather than an enjoyable challenge, try giving your child just one interesting problem to solve and see what happens. You might find that you both enjoy math more than you expect. Happy Math!